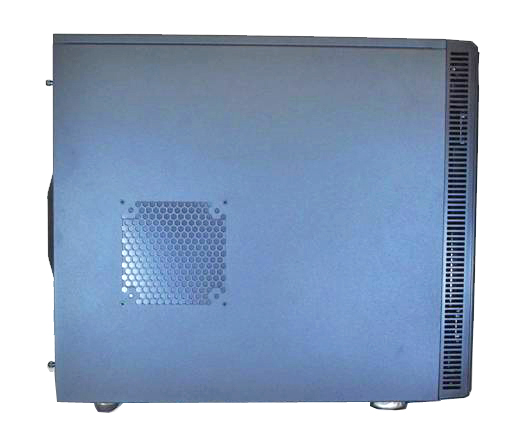 The left side panel is typical Fractal styling with the punched out fan intake compatible with both 120mm and 140mm, Fractals Design ethic has always been towards silent computing so as a fan is not provided as standard for the side panel the intake is blocked off with sound dampening material.

The finish of the side of the case is what Fractal have names “Black Pearl” although the actual appearance is a very dark carbon appearance, certainly very pleasing on the eye, a White and Grey version are also available. 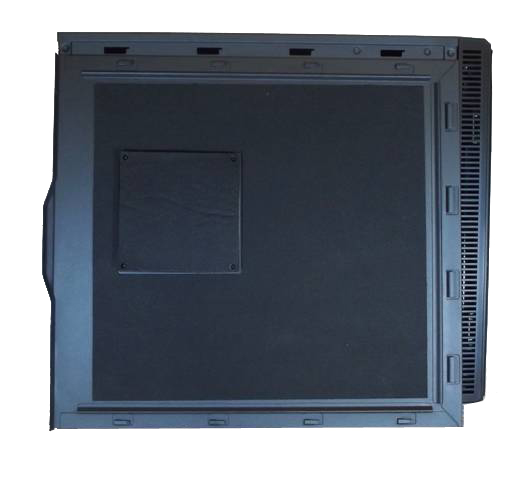 The inside of the left door has the ever familiar Fractal sound dampening material, unlike some manufacturers  using foam,  the main sound dampening on Fractal cases is a thick, heavy bitumen substance covered with fabric that not only provides superb sound deadening but adds substantial weight. More standard foam insulation has been used for the fan intake cover. 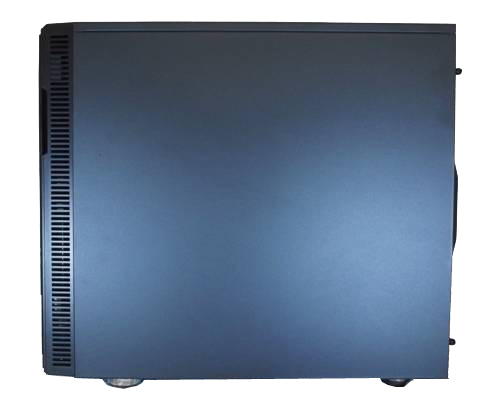 The right side panel is blank except for a large finger pull type handle at the rear to facilitate side removal. 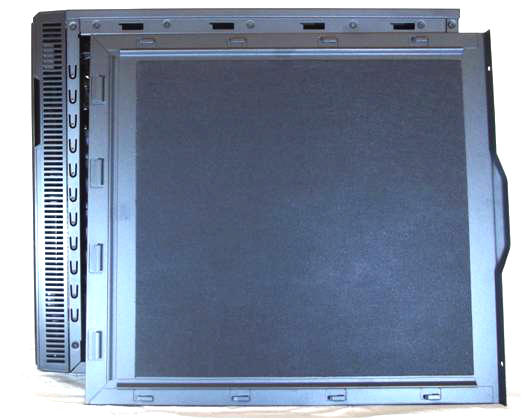 The reverse of the right panel is coated in the same sound dampening material as the left panel. 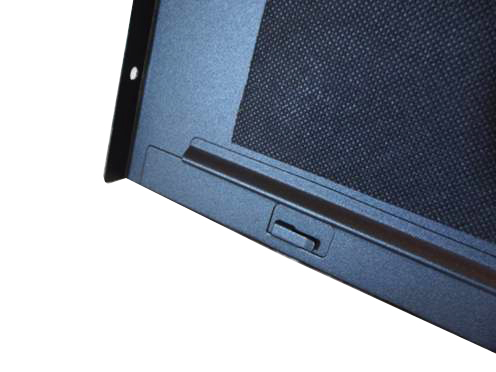 Another nice feature to see is the amount of refining that has gone in to a feature as simple as the side panels, thicker than standard materials and folded edges with bi folded struts to add rigidity. These side panels are “Bulletproof” and given some of the Fractal marketing where a Define XL side panel fired at with a shotgun “Bulletproof” may not be quite as metaphorical as first intended. 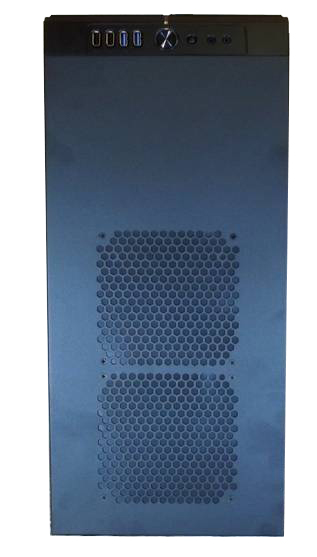 Where the R4 beings to separate its self out form its predecessors is in the top, with two punch-out’s compatible with both 120mm and 140mm fans and supporting 240mm radiators. From this side you can also see how much wider the R4 is compared to some other cases. 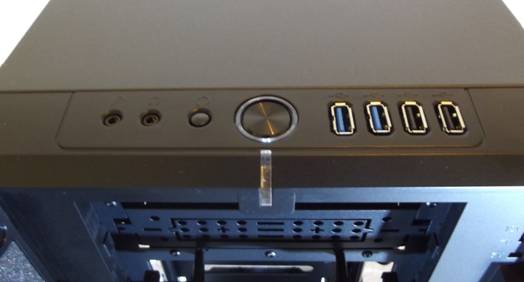 The front IO is the same as you would find on the R3 and connectivity in the form of standard mic and audio jacks, plus two USB2 and two USB3. 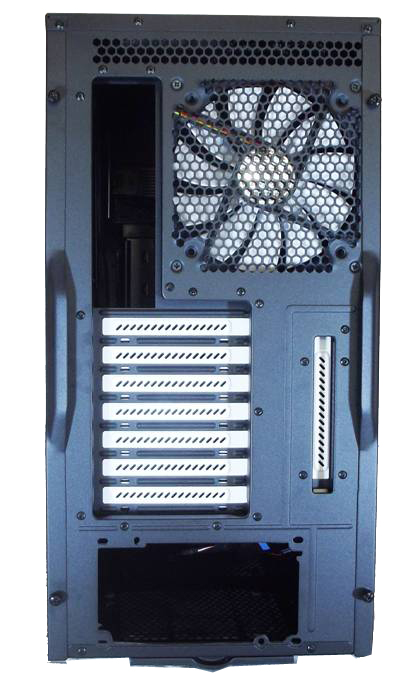 The case rear also highlights the changes the R4 brings to the fore with extra space on both sides of the PSU mount and an additional PCI for riser or expansion cards in addition to the 7 PCI slots in standard configuration, a single mount for 120 or 140mm fan is also provided. A notable feature that is very conspicuous with its absence is any grommets for external water-cooling, so confident are fractal in the ability to fit water-cooling in this case they have left out this option altogether. 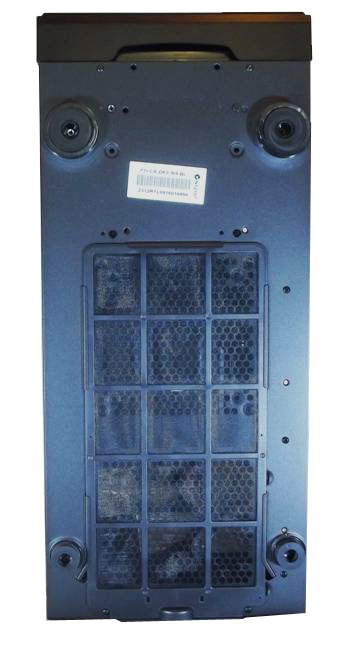 Fractal have included a MASSIVE dust filter in the R4 covering both the PSU intake and optional floor fan, towards the front of the case you will note four screws, these have a rather special use detailed later in the review. Keep your eyes peeled.

The front bezel has a very convincing brushed aluminium effect even though being 100% plastic, even feeling the front it is hard to believe that this is not metal.

The classic single light strip in the top centre is the only detail that breaks up the fronts stark lines. 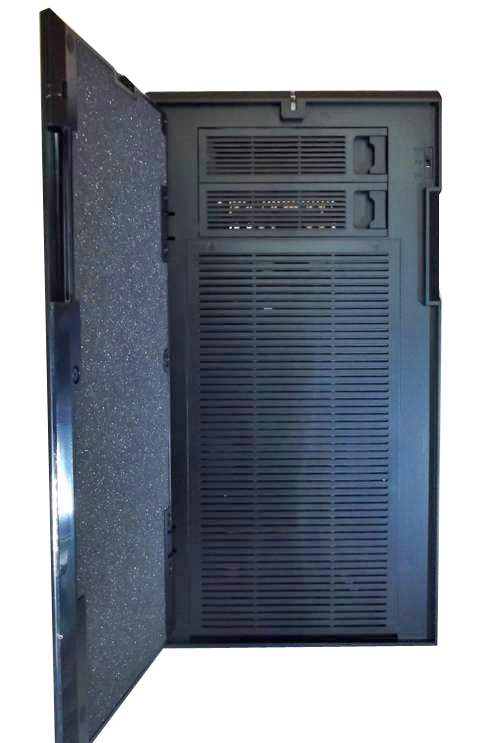 The inside of the front door is also sound proofed with very soft open cell foam, despite being largely hollow die to the void where the foam is installed , the door feels very sturdy and well made.

Under the door the large vents and access panel for the front fans are clearly visible, along with the easy out bay covers for the two ODD bays and to the top right a rather discrete three setting fan controller.