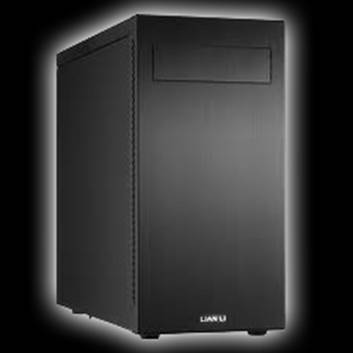 While installing this rig one thing that made it stand out is in reality it is the size of a Micro ATX case, but made for a normal ATX sized motherboard, which in my opinion is a bonus, I think it has an illusion style to it in the fact from the outside it looks like a Micro ATX case, but on the inside it is so much more.

The fact you could have a full blown gaming monster in a case so small is amazing if I had the hardware lying around I would have probably built a mod around this, could you imagine a triple SLI setup in this rig? I could, it would be a squeeze but not impossible. What Lian Li have done here with this case is simply made a optical illusion case, ok I will not go overboard, but I could see someone with a SLI setup opening the side panel and showing off like there David copper field or Dynamo, saying yes I did fit all that in this little thing.

There are a couple of things that could have been done to make this case receive our top award if not just for its trickery, but it will take most manufactures another 6-8 years to catch up with my thoughts and include them as standard. So we will have to wait I suppose.

Reality check:  The Lian Li PC-A55B despite its few little flaws is a great case with its illusion like feature of being small on the outside but big enough for a big boy setup on the inside. I would of loved to have the hardware around to do some beast of a custom gaming rig to put inside the case to fully show this. But it does make a great choice for the LAN gamer out there due to its compact size.

Thanks to Lian Li for supplying the case for review