Whilst the Cooler Master Storm Sentinel Advance II can operate as a purely plug and play device, software has been bundled that opens up the full range of functionality.

Once the driver CD is inserted I to the drive, or downloaded from the CM Storm website, An auto run dialogue will appear to guide you through the installation process. A reboot may be required depending on your version of Windows. 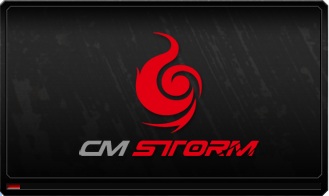 Loading of the Storm application is painfully slow, even when loading from an SSD loading time for a relatively simple application was close to 20 seconds, even allowing for the application to communicate with the mouse in that time to get a “status report” from the mice’s on board BIOS this is a pretty long time to wait. 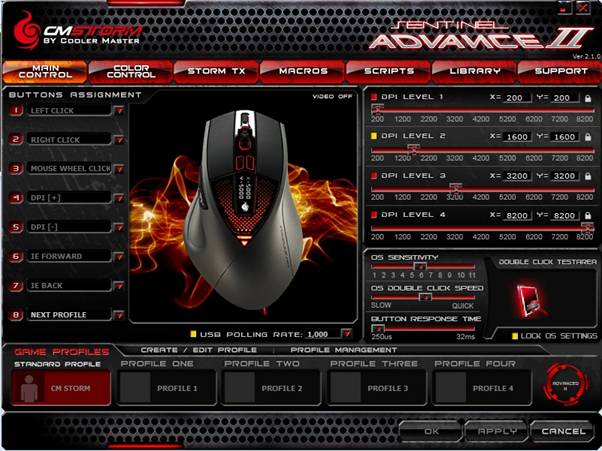 First screen in the GUI is the main control where you can configure profile DPI and individual sub DPI settings and assign some limited button adjustments.

The first thing you will notice is that the GUI is very busy putting both basic and advanced  controls in the same screen, this may daunt some users new to advanced configurations such as button response times and setting independent X and Y DPI. 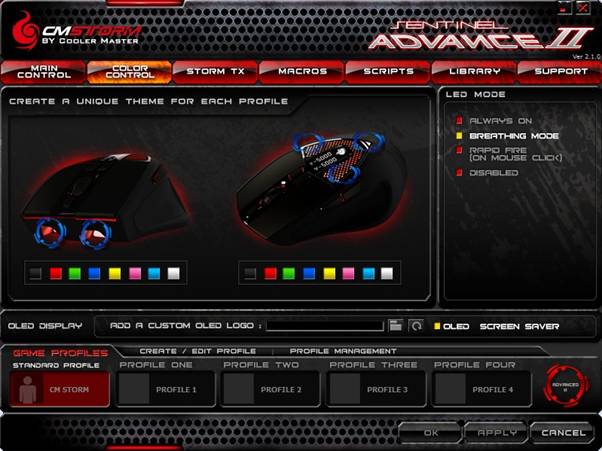 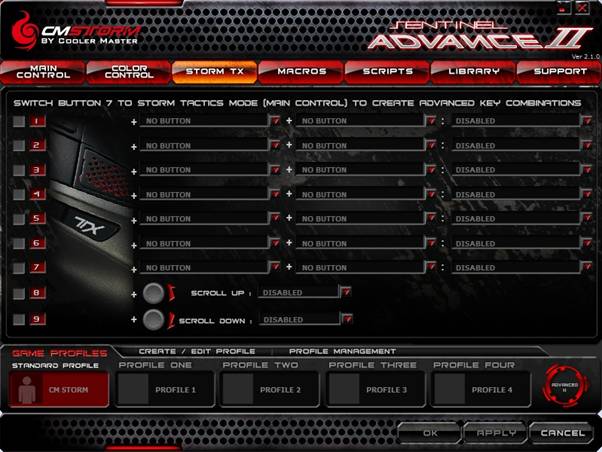 Moving on, the Storm TX (TTX) controls they key combinations that can be used to expand the key assignments in to virtual buttons, much in the way that multiple key strokes can be uses on a keyboard CTRL+ALT+DEL for example. 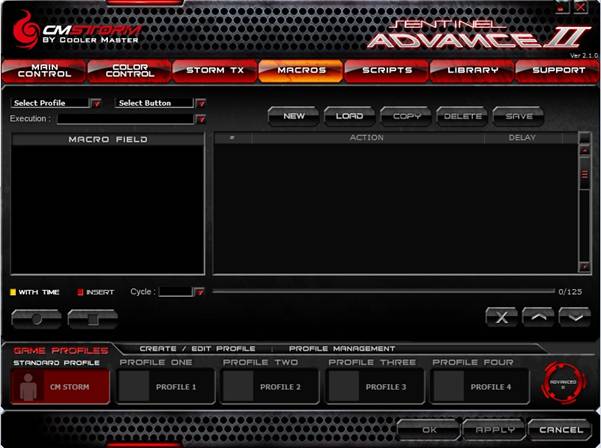 The macro page is fairly self-explanatory, set your key binds and key presses or set specifically times actions and store them for use in any game you wish. 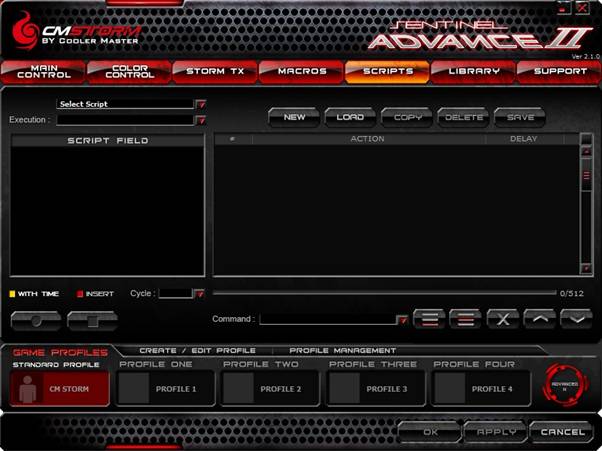 The script page is much the same as the Marco screen, and in this case it is exactly like the macro screen, the functionality is virtually identical in this GUI so its inclusion seems a little superfluous. 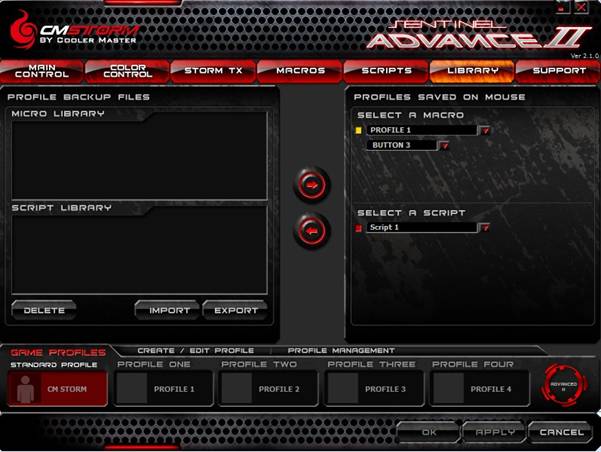 The Library page allows you to organize your scripts and macros and give them “soft” button associations, adding a macro to a button here will add it to the main screen drop down dialogues to assign to a key, adding on this screen places the macro in the list of macros that can be selected. 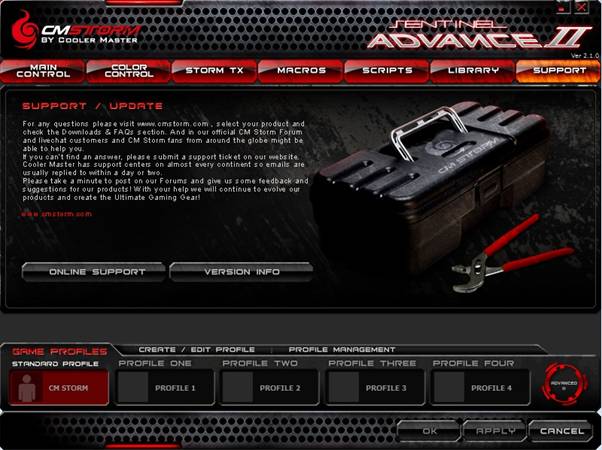 Last up in the GUI is the Support page providing links to online support and version history, this is another puzzling addition to an already option heavy GUI and could have been just as easily added in to an ‘About’ option drop down rather than a page to its self.

NOTE – If downloading the software from Cooler Master UK the majority of Anti-Virus software will pick up the installer as a virus, this is a mistake, rest assured the software is safe in install.

Testing was conducted over14 days with several games in long sessions to allow time to adjust to the mouse and learn to quick click the functions.

The Storm Sentinel Advance II Planetside2 (FFO FPS) the number of keys are limited and there is not the control complexity of an MMO RPG such as WoW, Planetside2 requires two profiles to be used if you want to use all functionality and mainly due to changes of role in the game Ground combat using profile 1 and air combat using profile 2. The macros needed were simple and executed well and immediately, the ability to change DPI on the fly comes in very handy for use as a sniper.

Responsiveness was good and key presses easy to execute due to the majority of buttons on the Sentinel Advance II only require a tiny force to actuate, for the most part this was a very useful thing when playing for extended periods, however, the same feather touch also activates the centre scroll which in most modes once clicked becomes a scroll follow, disaster in a game where the ability to press what you want when you want is just one key.

For a more complicated game with far more keys requires the Sentinel Advance II did not perform so well, often becoming overwhelmed with the amount of key presses and fast profile switching, this became especially evident when employing the TX button to use key combinations with the mouse often becoming confused whether it ie executing a mapped key or is being used to activate a combo function.

A note on the screen

We here LOVE devices with screens in them, but a mouse? Being top mounted the display is of some use if you are unsure of your dpi and are in a position to lift the mouse to look at the top and check, unlike steel series who thought it smart to install a screen almost identical to that in the Sentinel Advance II and being mounted in the bottom….. Yes you read that right the BOTTOM is completely useless when in use. Unfortunately the same can largely be said about the top screen here, you are unlikely to stop, pick up your mouse and read a tiny screen whilst in the heat of the action in a game.

If the screen was in a position that is not covered by the hand in use (somewhere on the left of the rear) I could understand it and it would indeed be very useful for at a glance DPI reading, as it stands on the top it is next to useless.