Install and In Use 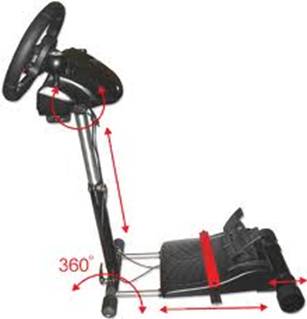 This is the guide picture taken from the Wheelstand Pro website, you can clearly see the range of adjustment possibilities they have put into their product, also the 360 rotation of the wheel upright means it can be folded either way, so how does it work in the real world. Well first let me attach my Fanatec wheel and find out shall we. 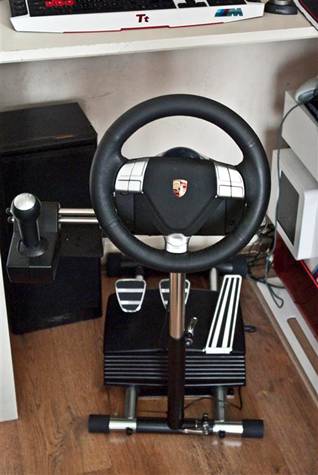 With the Wheelstand pro setup with the wheel, it was time to go test the stand out and play some serious driving games and of course my favourite Sim iRacing, before I talk about the use of this product, let me tell you a little bit about iRacing and why I use it as my sim of choice.

(iRacing is the ultimate place to go racing online. From NASCAR, to IndyCar, to sports cars and Grand Prix racing, iRacing has it all. All you need is a PC, a gaming wheel or game pad and an Internet connection. iRacing organizes all of the racing for you, or you can choose to host your own race. Either way the competition is as real as it gets – you’ll be racing against motorsports fans who share your passion for racing.)

I would have to agree with all the quotes above from iRacing, why it does not boast the graphics you would expect to see on a game today it is what I would call an accurate sim racer, meaning it will behave like you are in a real car, I racing has the realistic touch to it with laser scanned tracks that include every lump or bump that the real track has. Add to that it is really multiplayer only it actually adds a real edge of realism to it and makes racing online that bit more exciting.

Anyway enough of the excursion to iRacing, let us get on and talk about the wheelstand and what I found in my experience of using it over the last couple of months.

First off the setup of the product is pretty easy as mentioned before, but most importantly is I was quite shocked how the solid it was in use, ok if you are not sitting at the stand and turn the computer on, you do see a slight wobble, but nothing that would worry you. I would say it’s more of a shake really than I wobble I suppose, however once your feet are resting on the pedals there is no such movement.

Once I was actually gaming using the stand I could not let it go, I had so much more confidence within 20 minutes of using this (rather than desk setup) that I was knocking a cool 2 seconds from most of my lap times in iRacing, I also found this to be the same in Dirt 3 and F1 2010. I could not actually believe how suddenly I had improved that much, just from switching from desk to a proper support for the wheel.

I suppose I should have really expected it as the stand allowed me to set my wheel up to my optimal driving position rather than me adjusting to it clamped to my desk. I can’t believe really how much this has changed my experience in driving games and sims it is really quite impressive, Also due to the fact it is foldable and makes it much easier to store, I have found myself putting in 3x the amount of hours into driving games and sims, simply because I don’t have to keep packing and unpacking the wheel. 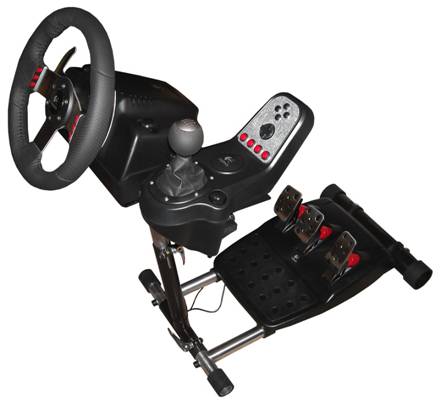 I did have a issue at first with the product in the fact with a 3 pedal setup it does not fold as far as I would like due to the centre pole lining up with the brake pedal, but thanks to the unique design you can just fold it the opposite way and it still folds up to a neat little package and fits under my desk and can be put away in about a minute and a half and the same for getting it out, which means I spend more time gaming with it than I did previously.