Installation was fairly straight forward for a watercooling kit, and thanks to the fact that it includes mounts to mount the radiator externally; it should fit in practically any case! The length of tubing included was plenty (I had about half a meter let over after this setup).

Since Larkooler opted for ½” OD tubing rather than 5/8” OD, it was quite easy to route. If your case doesn’t come with pre-drilled holes to feed the WC tubes (mine did come with holes at the top as can be seen in the picture), then you can use the PCI bracket included with the kit to feed the tubes outside of the case to the externally mounted rad. 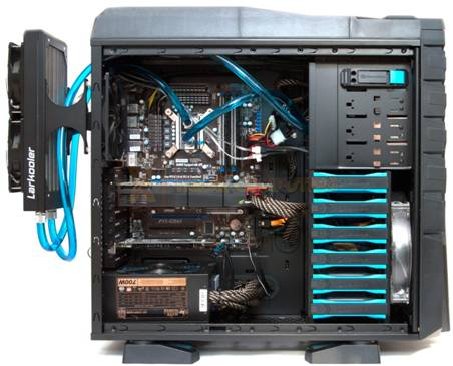 My only real complaint about this kit is that you are unable (at least per Larkoolers instruction books) to mount the fans so that they blow through the rad (when its mounted externally as above), but rather you are forced to set the fans up so that they suck air through the rad. It is my understanding that this “pull” setup is less efficient than the “push” setup, so it could potentially be limiting the kits cooling potential. However, we can consider the importance of this upon testing.

For this benchmark, I retested the Noctua & Titan Heatsinks in this new case & configuration (with the rad externally mounted) to provide a fair benchmark. Temperatures were taken from delta readings. For more information on delta temperatures, click here. 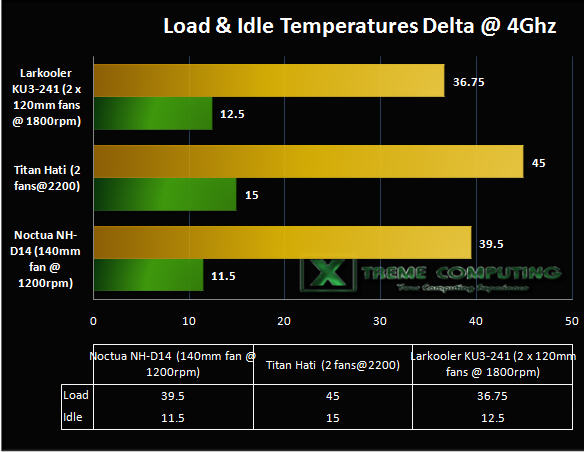 Interestingly, the Noctua beats the Larkooler at idle temperatures, however under load, the Larkooler pulls ahead of the Noctua, beating it by a whole 3 degrees C! The Titan Hati cannot compete with either the Noctua or Larkooler – it really is left behind, even with its really noisy 2200rpm fans! Talking of fans, the Larkoolers 2 1800rpm fans are actually not as loud as you might expect. They are marginally louder than the Noctua when it is at full whack, however in my test system (which has a GTX580) neither the Noctua or Larkooler were audible above the nVidias fan once that span up. In reality, I think that any user of the Larkooler would adjust the fans to their desired speed (e.g. if silence is important, down to 1200rpm, if temperatures are important, 1800rpm).

The pump in this kit is very quiet – I could not hear it above other system noise (even with the fans turned right down).

The Larkooler definitely beats the other coolers hands down, which is quite an achievement given that the Noctua is THE BEST air-cooler I’ve ever dealt with. However, I personally was expecting greater results from the Larkooler, and experience tells me that it could well be the limitations of the pump. I’ll soon be testing this theory by replacing the pump with a Swiftech MCP655 which can move 3x as much water as the Larkooler one. However, for the price, and as a first-time kit, the Larkooler watercooling kit is a very good competitor.